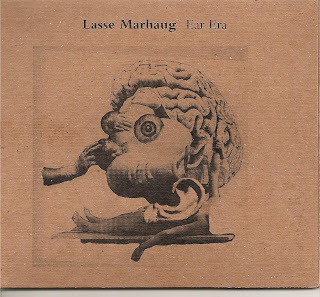 We have mentioned this record earlier in the blog, but here it comes again, it's in the house now. Lasse Marhaug got access to Henie Onstad Arts Center's archives of recorded concerts with Soft Machine, Jan Garbarek, Terry Riley, Arne Nordheim, Svein Finnerud Stockhausen etc etc, and made a piece of music from the recordings. I've been listening with wide open ears, but I am not able to recognize any Soft Machine sounds in there. It shouldn't come as a shock, but Marhaug has used this archive material in his own way, and you get no straight concert recordings at all. I mailed Marhaug, and he claims that he can't even remember if he used the Soft Machine recordings, so we end up with a record collector's and discography maker's dilemma: Maybe Soft Machine and Robert Wyatt are on this record, and maybe not! As a blogger i tag this post with Wyatt and SF just in case. The only artist i think I'm able to recognize here is Terry Riley, but I wouldn't swear on it. There are 500 numbered records of "Ear Era" (I've got number 51), and in addition there are 50 deluxe boxes. The box may have more music, and cost a lot more, but don't ask me about it.
Tuesday 16 September the organization "Ny Musikk" (i.e. "New Music") arrange a free concert with Lasse Marhaug (performing a version of "Ear Era") and Moha! in Bergen. Thank you very much!
Posted by Svenn at 7:56 PM