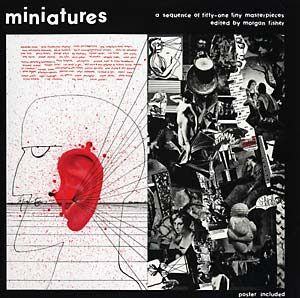 Megaphone/Knock´em Dead recently re-issued "Miniatures" - A sequence of fifty-one tiny masterpieces edited by Morgan Fisher (originally released in 1981 - or was it 1980?).

What a collection of (no longer than) one minute pieces!

Robert Wyatt was recorded at home in 1980 doing "Rangers in the night" with tape manipulation by Morgan Fisher.

We also find friends like Ivor Cutler, Lol Coxhill and Fred Frith, Frith doing no less than "The entire works of Henry Cow"!

And how about David Bedford playing "Wagner´s Ring in one minute" and Pete Seeger doing "Chorale for Beethoven´s 9th Symphony" for banjo? On the same album!

Now pressed on 180-gram vinyl with 23" x 23" foldout poster, and you will find the track list over here.