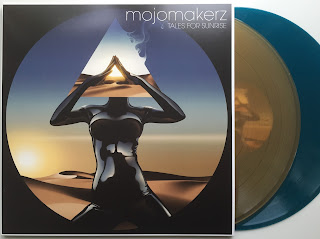 Mojomakerz are Paul Hegarty and Ian James Stewart. Robert Wyatt sings background vocals on "Ship of Fools" and "Weirdiful You" on their new album "Tales for sunrise" (Weirdiful You Records 2015).

"Weirdiful You" is also among the four tracks of Youth (Martin Glover) mixes to be found on a separate blue disc (to be played on 45 rpm) on my double limited, vinyl edition.
Watch the video uploaded by Mojomakerz, and you will see some groovy cooking too!

Among the other artists featured let´s just mention BJ Cole.

And the music? This is what they say themselves: "It's a mixture of electronic, ambient, rock, chilled music, some tracks are instrumental, some have vocals".