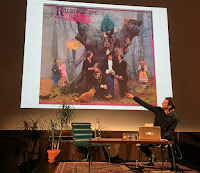 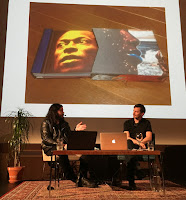 Off The Page is a music festival without music (spotlights on the conversations) usually held in Oslo. It is a cooperation between the organization nyMusikk ("newNusic") (Norway) and The Wire, and this year they came to Bergen! For the 2017 programme click right here.

27 - 28 January there were great talks, music market and film screenings.

One of the films was the BBC documentary "Free Will And Testament: The Robert Wyatt Story" (2003). You may watch an extract over at Vimeo (I was not allowed to embed it here).

In 2015 Marcus O´Dair presented his Wyatt biography "Different Every Time" at the same festival (in Oslo), so perhaps we have a Robert Wyatt tradition in the making here?

The photos are from Rob Young´s presentation "LP Sleeve as a Form of Theatre" and his talk with Stephen O´Malley ("Musical epiphanies").
Posted by Svenn at 7:04 PM