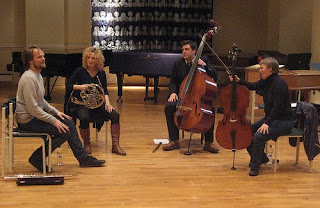 Wednesday Lemur did a Borealis concert and lecture at the Grieg Academy in Bergen. What a great concert they gave, and afterwards each musician talked about their work and their way of improvising and doing group compositions. I bet the music students and composers attending were even happier than me, but still. Hild Sofie Tafjord, Bjørnar Habbestad, Michael Francis Duch and Lene Grenager are Lemur. 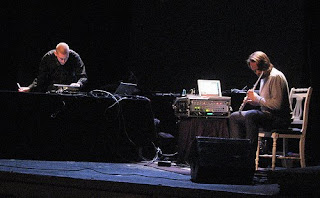 Later in the evening Bjørnar Habbestad (flute) played with Pascal Baltazar (computers and all things electric ). Baltazar was unknown to me, but the concert was fantastic. First out was Baltazar doing a solo piece, and then Habbestad did the same, and he was probably sampled by Baltazar who continued. The made a terrific soundscape. 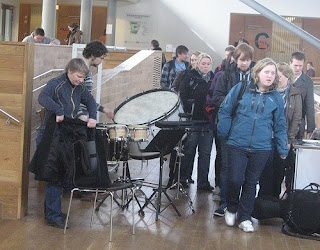 Midday Thursday Lene Grenager (cello)did a short concert with Håkon Stene (drums) at the Student's Center. Some fresh contemporary music to go with the lunch never hurt anyone (before this very day, at least).
Posted by Svenn at 8:45 PM