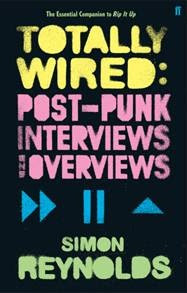 Post-Punk, New Pop, Mutant Disco and Punk-Funk, wonderful genres described in Simon Reynolds: "Totally Wired. Post-Punk Interviews And Overviews" (Faber and Faber 2009). I liked this book a lot, and it's got great interviews with people like Ari Up (The Slits), Jah Wobble (PiL), Green Gartside (Scritti Politti), David Thomas, Alan Vega (Suicide), David Byrne, John Peel, Paul Morley, Gina Birch (Raincoats), Anthony Wilson, Trevor Horn and Nikki Sudden (among others!). And since this is an "essential companion to" "Rip it Up", that one is just a couple of days away from my mail box too.
More info on Reynolds' blog.
And of course Robert Wyatt is mentioned here. Let's cite from the chapter where Reynolds is interviewing himself (pages 424-425): "I see post-punk as the resumption of this early seventies thing where black music gets meshed with English eccentricity and pathos. Which explains why Wyatt was such a touchstone figure for the post-punks, able to come back a credible figure rather than written off as a "boring old fart"".
Posted by Svenn at 9:38 PM