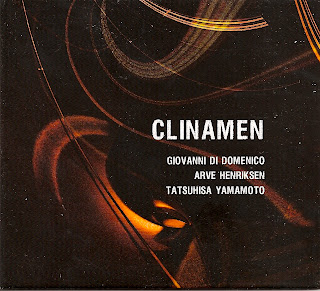 Oh, another album with Arve Henriksen is out here, so far without lots of fuzz being made about it!
On "Clinamen"  (Off/Rat Records 2010) we hear Giovann Di Domenico (keyb, electronics), Arve Henriksen (tp, voc, electronics) and Tatsuhisa Yamamoto (dr, perc).
I guess Arve Henriksen fans will recognize sounds from his solo albums and works with Supersilent here, as Henriksen is doing some falsetto singing, talking and whistling ("Hyrje" og "Vatos") in addition to his trumpet playing.
I hereby confess that before this I knew nothing about Tatsuhisa Yamamoto (worked with  Jim O´Rourke and Otomo Yoshihide) and Giovanni Di Domenico (played in "The Crappy Mini Band"!).

The album has it´s heavy and monotonous moments ("Idiot Glee"), but the music is mostly slow and open, and it´s a real album too! Play the whole record and you are rewarded with the two beautiful tracks "Fanno il Deserto e lo chiamano Pace" and "Clinamen" at the end.

The word "clinamen" seems to have been used to describe both atoms and authors, as you may read in  Wikipedia.
Posted by Svenn at 11:09 AM