Richard Thompson: "Live at the BBC" 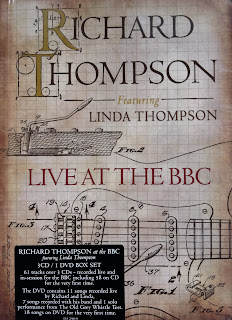 "Wall of death", "When the spell is broken", "Down where the drunkards roll", "Valerie", "Shoot out the lights" and a bunch of other fantastic songs, some of them more than once, acoustic or electric, with band or with Linda Thompson, all on three CDs and one DVD on Richard Thompson´s new release "Live at the BBC" (UMC 2011). The music was recorded from 1973 to 2009 and the videos were made 1975 - 1985. All in all you get 80 tracks, and most of them are released here for the first time.
Yes, you have to get this one!

If Thompson´s studio albums are necessary, make sure you check out his live albums too. They are sold through BeesWeb, and if you visit you will probably see Richard Thompson sporting some incredibly elegant clothes, having just been named Officer of the Order of the British Empire (OBE)!

Richard Thompson´s only Norwegian concert this summer is his solo concert at the Down On The Farm festival.
Posted by Svenn at 11:45 PM