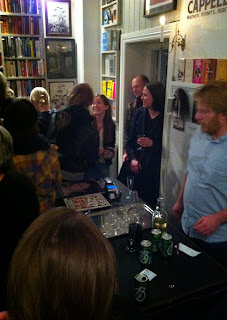 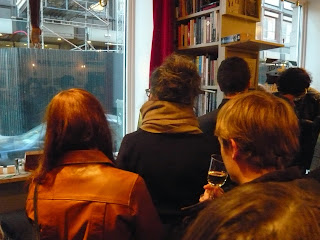 I was in Oslo for a couple of days last week and was able to attend the release concert of the two new Stine Janvin Motland albums (9th of May).

One of them, "Labour" (Pica Disk, vinyl 2014), is already in the blog and I bought "OK, WOW!" (+3dB, CD 2014) too. While the "Labour" tracks are Motland doing vocal acrobatics to sampled sounds of the city, and different natural habitats, "OK, WOW!" is just vocals. Not a singalong album that one either, but as they say in Germany "Das ist anstrengend, zuweilen auch beim Hören, aber von einer bizarren Schönheit, die man so nirgendwo sonst findet".

They probably say that all the time, but still!

Well, I usually stay away from outdoor concerts, but this one was OK (even if we couldn´t see the artist)! The concert was held in a packed and hot bookshop called "Cappelens Forslag" (well worth a visit!), and when the show was about to begin, Motland suddenly disappeared, transmitting the vocals from cold downtown Oslo, making it sound like the music on the "Labour" album.

"OK, WOW!" is in a series called "Music for one" (first release: Kjetil Møster: "Blow Job" from 2011), and Morten J. Olsen and Hild Sofie Tafjord (of SPUNK fame) have also recorded solo albums for this series. I´m not sure if they are in the shops, but check out the +3dB site.

The photos (even lousier than the usual ones):
- The first one: Stine Janvin Motland all smiles after the concert.
- The second one: Audience wondering; where the hell is she?

And added value: The shocked pedestrians walking by the shop believing that a lot of people were staring at them through the windows!
Posted by Svenn at 8:40 PM