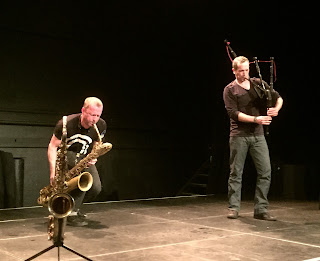 Holy mackerel what a concert the duo LUFT performed at the Nattjazz festival in Bergen last night! Wild duo playing and fine solos.

LUFT is Mats Gustafsson (sax) and Erwan Keravec (bagpipe), and a fitting name they have too, as "luft" means air in Mats Gustafsson´s own Swedish (and in Norwegian I must add).
These guys need some proper lungs to play what they do!

Wonder how they sound like? Click right here for one of four videos from their concert at Jazzhouse (Copenhagen) in February 2015.

Gustafsson said a studio album had recently been recorded by LUFT, but no deal had been done with a record company.