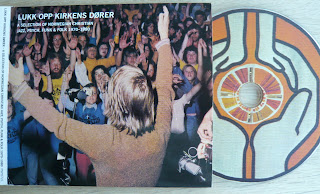 This might be only for the hardcore collectors of Norwegian music, but here we go anyway.
Plastic Strip  and  Lars Mørch Finborud, who gave us the great Compendium sampler in 2010, recently released a sampler with Norwegian Christian bands that I have never heard about in my life.
The title of this blog post is the English translation of the first part of the full album title "Lukk opp kirkens dører. A selection of Norwegian Christian jazz, psych, funk & folk 1970 - 1980".

The music is more than OK, and  yes, it is jazz, psych, funk and folk. Some quite well known musicians from outside the Christian music field is here too, like Fred Nøddelund, Ditlef Eckhoff and Knut Risnæs (Good News), Torbjørn Sunde (Presens) and Trond Villa, Pete Knudsen and Terje Venaas (Kari Hansa & Gregers Hes).

I don´t want to be rude, but the lyrics are best forgotten, so if you don´t understand Norwegian, this album may sound even better!

Cunclusion: An interesting album for friends of Norwegian rock and jazz, and a great work by Lars Mørch Finborud. The booklet is fine too, and written in English all the way!
Posted by Svenn at 5:08 PM