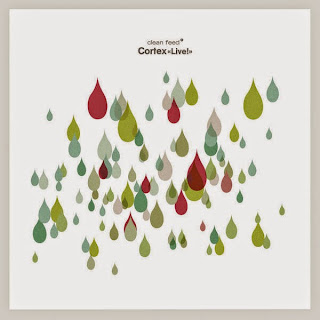 Another short message from me on a Norwegian jazz record you should check out:
Cortex: "Live!" (Clean Feed 2014).
I don´t know if it´s recorded live in front of an audience (can´t hear them), but it sounds fresh and alive and kicking.

You get some new music and some nice versions of tracks from their previous albums - "Gray Matter" from "Resection" (Bolage 2011) and "Endorphin", "Cerebrum" and "Hub" from "Göteborg" (Gigafon 2012).

The band is Gard Nilssen (d), Kristoffer Alberts (reeds), Ola Høyer (b) and Thomas Johansson (cor), and as they say over at Clean Feed - "Cortex plays new jazz with the tools and forms of the old one".

An earlier post on Cortex right here.
Posted by Svenn at 4:03 PM