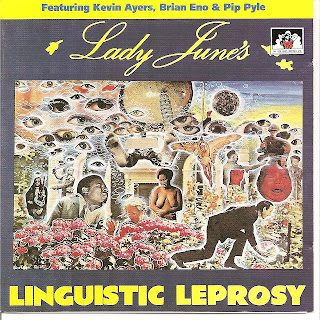 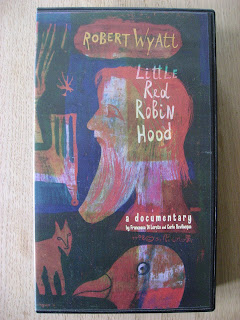 It's about time to mention the new edition of "Lady June's Linguistic Leprosy". This record was first issued in 1974 (5000 LPs!), and on CD in 1992. The new CD seems to be identical to the 1992 version.
Robert Wyatt is not on the record, but some other favourites are, like Lol Coxhill, Brian Eno and Kevin Ayers. Tonight i watched the Wyatt-documentary "Little Red Robin Hood" (again!) (VHS- black & white, 1998). In this film Lol Coxhill tells that he, Kevin Ayers and Robert Wyatt (with Archie Leggett) recorded a number for Lady Junes record (while "Lady June and Alfie went out shopping"). Lady June did not like the song, and it ended up as "Soprano Derivativo" on "...oh really?".
The things you learn in this blog!
Posted by Svenn at 9:42 PM