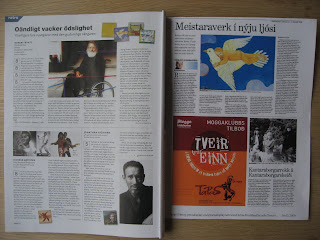 Robert Wyatt is still getting press on the reissues of his solo albums on Domino. Here you have Swedish Sonic ("Oändligt vacker ödslighet", no 45, 2009), who conclude that the future looks bright for Robert, and Icelandic Morgunbladid (Sunday, 15 february, 2009) in "Meistaraverk í nýju ljósi". My Icelandic is a bit rusty (even if Norwegians may understand quite a lot of the words) but "meistaraverk" is "master works", so I think we agree with the author here.

And in this review of "The Black Ghosts" we get another example of Robert Wyatt as a reference. "There's also the mysterious inclusion of "Full Moon," which combines the band's more typical sound with a bit of freak-folk Robert Wyatt would be proud of". So Wyatt's gone "freak folk" now?
Posted by Svenn at 9:46 AM