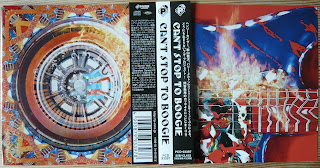 "Boogie is a repetitive, swung note or shuffle rhythm, "groove" or pattern used in blues which was originally played on the piano in boogie-woogie music", says Wikipedia.

We haven't boogied too much in this blog, but some weeks ago I attended a fine concert with Koboku Senju, and they do not play boogie (!), but I bought a CD from the sales table there. The title "Can't stop to boogie" (P-Vine (JP) 2011) is quite descriptive of course, but I thought what the hell, let's boogie! The link between Koboku Senju and boogie is guitar player Tetuzi Akiyama. Here he plays with John Hanes, Dan Schwartz, Barry Melton and Henry Kaiser.

No it's not a pure party album, and I was prepared for that with Akiyama and Henry Kaiser in the band (sorry, the other guys are new to me), but it still is a lot of fun with some twisted blues, rock and country, and they even manage to drag some experimental stuff in here too with "The Derek Bailey Boogie"!
They claim that John Lee Hooker (the man with album titles like "Endless Boogie") could dig what Bailey was doing, but asked "But does he know how to boogie?".

I'm not sure how wide distribution this record is getting, so you have to check on the net yourselves, or visit some concerts. I'm going to see  Koboku Senju again at the Punkt festival in September.
Posted by Svenn at 4:02 PM