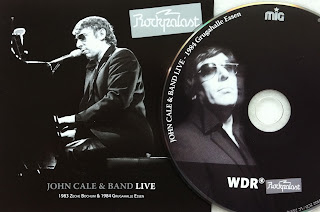 Now listen kids, in the old days we had almost no rock and pop on the telly! At least true for Norway. That´s why we were very happy when our NRK started broadcasting the German Rockpalast shows in the 70s and 80s (yes that is 1970s and -80s for you all). Run on over here to see who played.

The album "John Cale & Band Live" (MIG 2010) passed below my radar last year. Here we get one CD with John Cale and band from 1984 (David Lichtestein (dr), Andy Heermans (bass), David Young (g)), and one CD with John Cale solo from 1983, both recorded at Rockpalast.
This album is a real treat for Cale fans, with different versions of songs from the early solo albums , and the usual cover songs ("Streets of Laredo", "Heartbreak Hotel"). The band album is aggressive in front of a rowdy audience, and the solo album is more relaxed of course (?).

If you have not heard John Cale´s albums "Vintage Violence", "Paris 1919", "Fear", "Slow Dazzle" and "Helen of Troy", please check them out before or after you listen to the Rockpalast recordings. Also look for another live solo performance called "Fragments of a rainy season" (1992). A great album, and I´m glad I attended Cale´s concert in Oslo on that tour!
Posted by Svenn at 9:48 PM