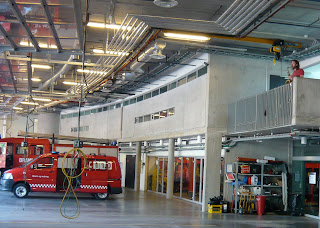 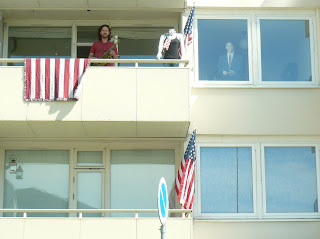 This year's Bergen International Festival is soon over, but Sunday's most busy musician must have been Bergen's own saxophone player Kjetil Møster (The Core, Ultralyd etc). I attended half of his Sunday tour, seeing two out of four concerts! Three concerts were parts of a series called "The sound of open houses" (my translation).

I was present at his concert at the Bergen Fire Station, where he played for fire men and regular audience. Møster described this music as industrial in a local newspaper, while the first concert of the day, which was held in a beautiful house with garden just outside town, made him play some eastern/asiatic elements.
Well of course, buildings and surroundings may influence the musician, and when he played from the balcony of an appartment in the afternoon sun, he chose more standard jazz for his 15 minutes long solo. The appartment owner's american flags and picture of Obama in the window may have played it's part too!

Someone posted a couple of not too good videos again. From the balcony here, and the fire station here.
Posted by Svenn at 5:14 PM