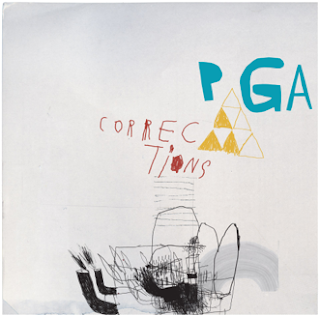 I have mentioned Va Fongool´s first two albums (by Wolfram Trio and Ich Bin Nintendo) in this blog, and if they caught your attention, you might want to check out their third release; PGA´s album "Corrections".

PGA is Fredrik Luhr Dietrichson (b) and Jan Martin Gismervik (dr), both of them also playing in Wolfram Trio.

The first track, "Out of Tune", might be considered humorous, but most of the time it is pretty dark impro we get here (not so strange with bass and drums perhaps?), and a little spooky too. But it is sounding good!

PGA might be "Poor Guy Alone", according to some track titles.

They have invited both Sigbjørn Apeland and Nils Økland for some of their release concerts. Now, that would be interesting to hear!
Posted by Svenn at 6:10 PM