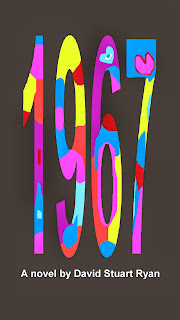 It´s a novel happening in England in the year 1967 of course, one chapter for each month, with the standard ingredients sex, drugs and rock & roll, matched with well known happenings, like the Rolling Stones drug bust and the Beatles meeting the Maharishi. You have read it all before I guess.

What caught my eye was taken from the chapter "September", where we are at The Roundhouse with Paul and Sylvie for The UFO Festival:

"Just after midnight came another assault on the senses from The Soft Machine, the drummer, Robert Wyatt, stripped to the waist as he worked himself up into a frenzy of powerful ecstatic rhythm that forced Sylvie and Paul to re-enact their mating dance all over again" - and later - "...she moved fluidly to the surging rhythm of the bass guitar, the lead guitar and the crashing drumming in the background as The Soft Machine played "Hope for Happiness" at full volume right next to them on the stage....".

According to both Michael King´s "Wrong Movements. A history of Robert Wyatt" (1994) and Graham Bennett´s "Soft Machine. Out-Bloody-Rageous" (2005) Soft Machine played this concert September 9 on the same bill as Pink Floyd, The Move and Denny Laine, while Ryan throws in Arthur Brown instead of Laine. For the show I guess?

Soft Machine shared a bill with The Crazy World of Arthur Brown" a couple of times in June this year.

Any old timers visiting, who were present at any of the shows mentioned here?
Posted by Svenn at 7:16 PM