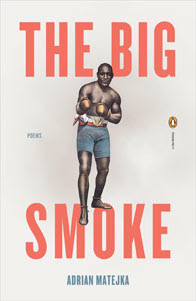 Matejka lets Johnson and some of his girlfriends/wives speak through the poems, describing Johnson´s life and boxing career, from fighting for pocket money as a young boy to championship and high life, with nice cars, champagne, operas and pretty white women. This happening in a racial segregated society, and bound to cause envy and riots.

The music on the video is not the original soundtrack released by Miles Davis. Read more on YouTube.
Posted by Svenn at 12:03 PM