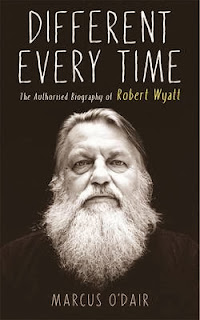 And we are still waiting for the release of Marcus O´Dair´s Robert Wyatt biography "Different Every Time" (Serpent´s Tail 2014).

While you are waiting, listen to both Robert Wyatt and Marcus O´Dair on Grasscut´s "Richardson Road", from the album "Unearth" (2012).

Checking Amazon for the biography, I noticed a book I have missed this year, and just have to order too: Dave Thompson - "June 1st 1974: Kevin Ayers, John Cale, Nico, Eno, Mike Oldfield and Robert Wyatt: The Greatest Supergroup of the Seventies" (Create Space Independent Publishing Platform 2013).

Any views on that one out there?
Posted by Svenn at 8:26 AM