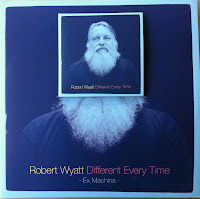 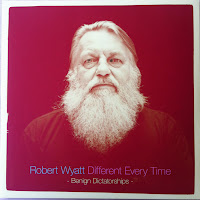 If you still haven´t read Marcus O´Dair´s Robert Wyatt biography, Domino´s compilation album(s) "Different Every Time" is the perfect soundtrack while reading it.
And if you already have read it, it is probably a great soundtrack to your life too.

The compilation is curated by Robert Wyatt together with Domino and biographer Marcus O’Dair. The first part (‘Ex Machina’) collects tracks from Robert Wyatt´s own records (solo and bands) and the second part ("Benign Dictatorships") has tracks from his collaborations and guest appearances.

Any such collection of tracks from an artist is bound to create discussions among fans about the selection, and specially about the tracks missing, but I guess few will disagree that this is a very good sampler and a fine introduction to Wyatt´s work for those who do not know him that well.

According to the liner notes (written by Marcus O´Dair) this is how is how the selections were done:

"The criteria were simple: individual tracks were chosen simply on aesthetic grounds, but the compilation also had to work as a coherent sequence of music. Where possible, we also chose tracks that had a particular personal resonance for Robert. The selection was intended to be representative, but only up to a point."
The last point there explains why there are only one Soft Machine track, and two by Matching Mole, and nothing from "Rock Bottom" and "The end of an ear".

Me, I´m really happy to see Michael Mantler´s name more than once and the inclusion of a John Cage piece from Eno´s Obscure label.
The ones I might be missing (Eno´s own albums, Kevin Ayers, John Greaves, Ultramarine, Wyatt/Atzmon/Stephens "For the ghosts within") is no big problem for me, since I have got them anyway! But on the next sampler perhaps!?

For every track you get a list of musicians and producers, but unfortunately not the records they are taken from.

And read Ian Penman´s Review of the biography in The Guardian 26 November 2014.

This has been quite a good Robert Wyatt year!