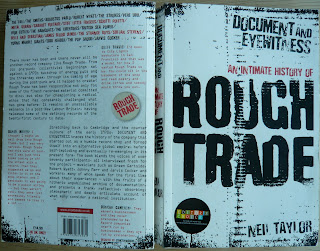 Rough Trade! They started out with bands like Stiff Little Fingers, Cabaret Voltaire, Raincoats and The Smiths, and lately they have released The Strokes, Belle & Sebastian, Sufjan Stevens, Arcade Fire and Antony and The Johnsons and others (see list of artists).
Geoff Travis started the record shop Rough Trade in London i 1976, and it developed into a record company in 1978. The history of how the shop and company that focused on post punk and alternative rock, changed from a radical collective (one for all an all for one, and everything had to be discussed!) into what became more like a major label, is described in "Document and eyewitness. An intimate history of Rough Trade" by Neil Taylor (Orion 2010).

The book is mainly interviews with Geoff Travis and several (!) co-workers and some musicians too.
Robert Wyatt is one of the musicians interviewed. He ended up on Rough Trade after a fall out with Virgin. Wyatt don´t describe Virgin´s Richard Branson as the evil guy, but calls him a "straight-down-the-line-neo-Con capitalist". Wyatt was treated well by Rough Trade, and cooperated with some of their artists ( Scritti Politti and Raincoats). Did he work with Scritti Politti because Alfie claimed their music was perfect for kneading bread (The Sweetest Girl)? Could be!

Even if it´s a bit too much of the business aspects here for my tastes, it still is a good read, and you should probably order it too. If you are just going to sneak into a shop and read the Robert Wyatt interviews, you will find them in "Chapter 6: 1980" and "Chapter 8: 1982".

Green Gartside (Scritti Politti) mentions a soundtrack he made with Robert Wyatt for a Cinema Action film called "So that you can live", about striking miners in Wales (Lindsay Cooper is also represented). I checked with Michael King´s "Wrong Movements. A Robert Wyatt history" (SAF 1994), and a "slow tempo performance of "Born Again Cretin"" seems to be on the soundtrack.
Posted by Svenn at 10:44 AM