10 Songs for the new depression 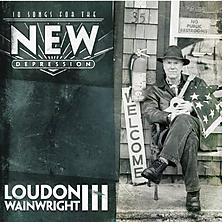 Loudon Wainwright III is an old hero in my house, and I dig both his sarcastic songs and his sad ones.  He´s here again, with an album with songs on , yes, the new depression. He´s american of course, but the rest of the world recognize the problems too!
Guitar, ukulele and voice, that´s enough for Loudon, but the album is a bit on the short side (30 minutes) even for me (who think a lot of albums are too long).  Check his site for short comments on the tracks (both his own and cover songs).
I wanted to compare these songs to the songs Woody Guthrie sang during another depression, but the BBC seems to disagree with me, so I´ll just shut my mouth. But I like it, oh yes!
Posted by Svenn at 8:04 PM