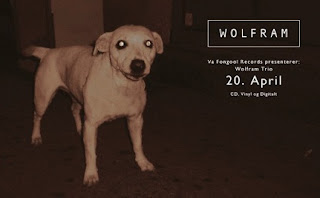 Those of you interested in Norwegian jazz, better look out for the new record company Va Fangool. They will work with young musicians who play "alternative and free music", and their first release is the trio Wolfram´s self titled album.

Wolfram is Halvor Meling (sax), Fredrik Luhr Dietrichson (double bass) and Jan Martin Gismervik (drums). These guys are new to me, but they play quite easily accessible free jazz (that´s possible?!), of good quality!
We get ten tracks, the longest is called "6:29", the shortest "02:33" and the album clocks in at 38:33. Yes, all tracks are named after their duration. I would not mind some longer musical journeys though!

Wolfram I by Wolframtrio
Posted by Svenn at 6:54 PM