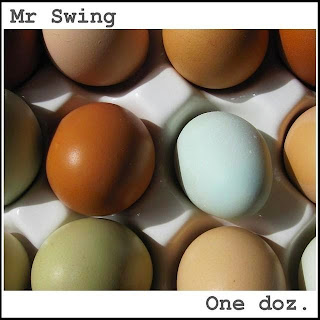 Checking Une Discographie De Robert Wyatt again, I found I had missed another release with Robert Wyatt on it.

On Mr Swing´s "One Doz." (JT Music (UK) 2013, digital release) there is a snappy tune called "Lumpit" (a touch of pop Eno and even Penguin Cafe Orchestra in there?) with Robert Wyatt on backing vocals (way back there) and perhaps drumming?

So far I have only downloaded this one track from iTunes, but you streamers may find the album on Spotify and Wimp.

Anybody out there with some more info on the band and the release (yes I know Google!).
Posted by Svenn at 10:10 AM