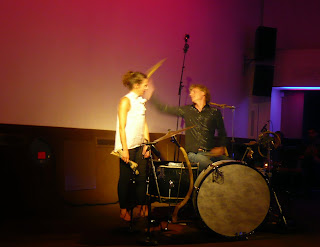 We have had lots of posts on Terje Isungset in this blog, and most of them I believe, on him playing ice instruments, but please don´t forget the man plays on drums, stones and wood too!

Yesterday I attended a concert at the Landmark club in Bergen, where Isungset played drums, creating fantastic soundscapes, and Therese Skauge was dancing.
Now, I have to admit I haven´t seen lots of dance performances, but I was quite impressed watching and listening to these two artists who seemed to inspire each other. Skauge dancing to the drums and Isungset playing to the dance.

I´m not sure if there is a complete Terje Isungset discography on the net (or elsewhere!). He has worked in bands Orleysa, Utla and Groupa, and with among others Frode Gjerstad, Arve Henriksen, Stian Westerhus and Per Jørgensen, playing jazz, folk and/or improv, but combine Wikipedia, Discogs and his own site and you may start your research.

Added 5 October 2014, a short video from the performance: