Pamela Windo: Him Through Me 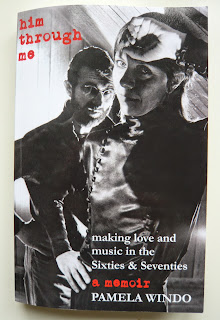 I finally got around to read Pamela Windo´s "Him through me. Making love and music in the Sixties & Seventies" (CreateSpace Independent Publishing Platform, 2014 - adaptation of original e.book from 2013).

This is the story of the careers and lives of Gary Windo (1941 - 1992) and Pamela Windo. We get the music, the musicians (a lot of regulars from this blog), the drugs, love in an "open" marriage and the struggle to make room to develop her own music while being a mother and a woman in an man´s, man´s musical world.

A touching and entertaining read!

Since this is "Robert Wyatt and Stuff" just remember that Gary Windo plays on Wyatt´s "Rock Bottom", "Ruth is Stranger than Richard" and "Theatre Royal Drury Lane..", and you will also find him on the collection "Flotsam Jetsam".

The book has discographies and concert lists for both artists.

I heard Gary Windo live only once, as he played with the Carla Bley Band at Molde International Jazz Festival in 1978. I can´t remember much of the concert, but I remember this guy walking over to a friend of mine and me, while we were relaxing on the Island of Hjertøya near Molde, a popular place to swim.
That was Gary Windo and he was very interested in all the sheep shit laying around on the island. He ended up suggesting we started to produce "sheep shit jackets". That never happened unfortunately.

He also wanted to swim to Molde from the Hjertøya island, but was a bit worried about sharks! We assured him there were no sharks there, but begged him not to try because of the cold water and the distance (a couple of kilometers!), and he probably went back by boat.
Posted by Svenn at 7:17 PM