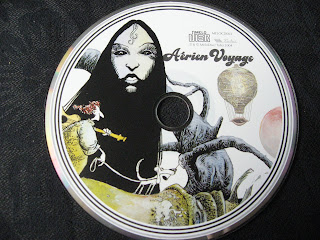 Thore Hansen is well known (in Norway at least) for his own books and his collaborations with other authors as illustrator. He has also made great illustrations for records. We have mentioned Kiruna in an earlier blog post, and now i own the sampler "Aerien Voyage" (picture) too.

The samplers contain rare and unreleased Norwegian music. See info and covers here. There are probably others too, so please write a comment if you know more record covers by Thore Hansen.
Posted by Svenn at 7:14 PM