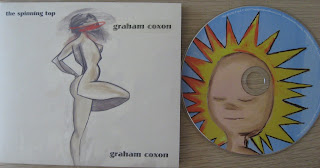 I did it again. I bought an album the guys in the record store played on their stereo. These people know how to trick you. This time I got "The spinning top" by Graham Coxon. I'm a bit embarassed, but honest as I am I'll admit I thought this was some new guy who had managed to get Danny Thompson and Robyn Hitchock to guest on his album. Coxon of course has several solo albums in his discography already, and he's a member of Blur! No wonder I never win the pop quiz.
Anyway, this is a quite nice album! It's a bit of indie and a bit of folk, and I can smell Nick Drake in there and even Incredible String Band ("In the morning"). I'm not a big fan of rock lyrics, but people have told me that this is a kind of a concept album, telling the story of a man from birth (first track: "Look into the light") until death (last track: "November").
I see no reason to avoid this one (if you still have some money left). I'll even guess Robert Wyatt could cover "November".
Posted by Svenn at 6:30 PM