New Riders Of The Purple Sage 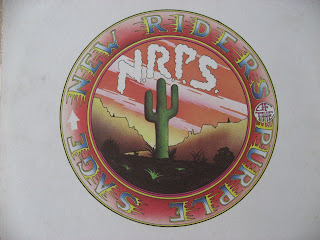 I've been listening a lot to the new sunn O))) album lately, but found it hard to write about it, and realized I needed a country break. So instead of the growling noise of sunn O))), you get "New Riders Of The Purple Sage's" self titled album from 1971 (Wikipedia on the band). This is the only album I have with the band, but I have played it a lot! It's perfect for any Grateful Dead fan (and almost everybody else, as long as they're able to swallow their country).
The music is made by guitar player and vocalist John Dawson, and the other guys are David Nelson (g, voc) and Dave Torbert (b, g, voc). On the album you'll also hear Jerry Garcia (who might be a real band member?), Spencer Dryden, Micky Hart and Commander Cody, and if you have to Google these guys, you're probably young (OK, check your year of birth, just to be sure).
And the album's on Spotify too! Nice?
Posted by Svenn at 7:45 PM