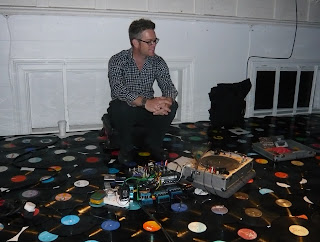 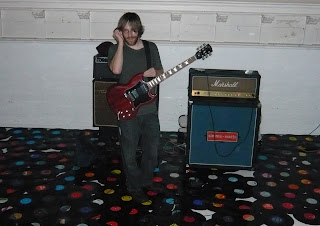 Saturday evening I attended a double concert together with just a few other people at Bergen´s Lydgalleriet (The Sound Gallery). Janek Schaefer (UK) and Mick Barr (US) were both new to me, but I understood by the pre concert chat, that some found it pretty amazing that Janek Schaefer was playing here. He was the first one out, and made some fascinating soundscapes with a record player and some electrickery. If I found his performance a bit too long, I woke up with a bang! when Mick Barr got going with some wild guitar playing. I think we were 12 people left, and if I wasn´t so old and shy, I just might have headbanged a bit.
See Barr on YouTube, recorded a couple of years ago.

You never know what you get at Lydgalleriet, and on Tuesday 15 September, you have to wear swimming suits, to listen to underwater musicby a.o. Maia Urstad, Espen Sommer Eide and Magnar Åm.

I have collected my pictures from the gallery in a Flickr set.
Posted by Svenn at 6:39 PM