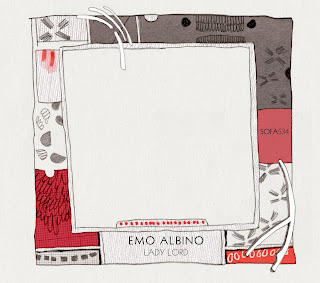 Emo Albino is Ivar Grydeland and Ingar Zach, the guys behind the record company SOFA, and known from bands like Huntsville and Dans Les Arbres. Their second duo album "Lady Lord" is now out there for you to grab.
In my (not too advanced!) way of describing music, I usually end up calling this kind of music soundscapes, ambient or soundtracks. What you get is a slow flowing, dark river of crackling improvisations. I guess Grydeland and Zach play synths and drums, and also play with electricity and prepared instruments of different kinds, from music shops, kitchens and carpentry workshops? I downloaded the music, and their site only says they play "music".

I still love to own CDs and LPs, and Clare Cooper´s covers of the albums on SOFA are great, but when I could get the whole album (one track) for 8 Norwegian kroner at the shop Platekompaniet, I just couldn´t resist. The one track - one price policy seems to work over at Amazon too.

Fair or not, you may get a damned fine album for next to nothing.
Posted by Svenn at 9:08 AM