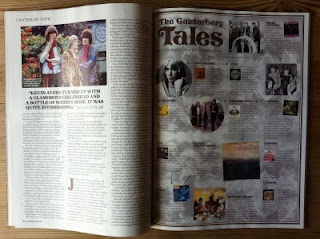 The Classic Rock magazine, has six pages on the Canterbury scene in their August issue. (The issue might have been for sale for a long time already in the rest of the free world, but we are a bit slow up here in Norway). Paul Moody has written an OK piece, starting with the mother of all Canterbury bands, The Wilde Flowers, with Robert Wyatt, Kevin Ayers, Hugh Hopper, Brian Hopper, Mike Ratledge and Richard Sinclair.

His focus is on the people of the two bands that came directly out of The Wilde Flowers, Soft Machine and Caravan. I´m not sure if Moody interviewed Wyatt and the others recently, but Richard Sinclair claims Robert Wyatt was a 100% Canterbury man in the early days, even if he claims (as we know): "The "Canterbury scene" tag pisses me off. It was something a journalist made up in the 70s and it stuck."

Visit Calyx for all things "Canterbury", and check out the Norwegian site The Polite Force too.
Posted by Svenn at 2:40 PM