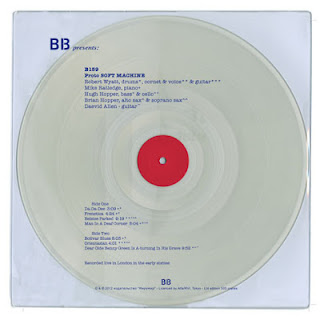 People, you just have to read (or better participate of course on) the Canterbury forum "What´s Rattlin´".

Recently they have been discussing a Russian release on B 13, proto SOFT MACHINE - "The Earliest Recordings", with material "recorded live in London in the early sixties" (scheduled for release in July).

Musicians are Daevid Allen, Robert Wyatt, Mike Ratledge, Hugh Hopper and Brian Hopper, and the music has probably been released earlier on Daevid Allen Trio "Live in 1963" and the "Canterburied Sounds" collection, both on Voiceprint.
See if you can find them on the Calyx discography site!
Posted by Svenn at 9:23 PM