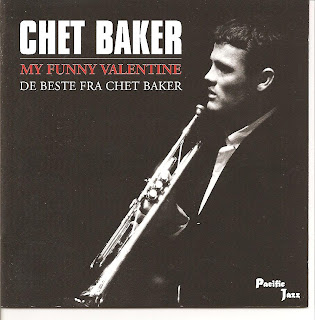 I was looking for some Chet Baker videos on YouTube some days ago, and realised that "someone" is taking care of his legacy, by trying to remove him from sites like YouTube. I don't think that's very smart, but there you go, family and lawyers.
Let me just point to some Norwegian Chet Baker projects, and hope the lawyers won't mind. He recorded a beautiful album with poet Jan Erik Vold in 1988 called "Blåmann Blåmann" (now available again) (Hot Club 1988, 2008) and the "best of" collection "My funny Valentine. De beste fra Chet Baker" (EMI 2006), where you also get a live CD with Baker and Norwegian musicians from 1984-1988. The tune "Blåmann Blåmann" is a traditional song about a boy and a goat (!), and if you want to play Baker's version look here.
Posted by Svenn at 9:03 AM