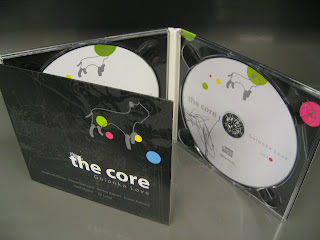 The Core's new double live album called "Golonka Love" (Moserobie 2008) is out for you to buy (but not on the Moserobie site still!). You get three concerts from Poland, where the band seem to have an enthusiastic audience. The newest concert is recorded in Szczecin in February 2008 with Espen Aalberg (dr), Steinar Raknes (b), Erlend Slettevoll (Rhodes) and Jørgen Mathisen (sax). This is a quite new The Core-sound to me, but it swings more than OK. The recordings from Lublin (Mars 2007) and Poznan (December 2007) with Kjetil Møster (sax) and Slettevoll on piano sound even better to my ears.On the last concert they also have a DJ playing records with the band. For some moments I was wandering who the hell was singing and playing accordion with The Core.
Great band. Great record. Play loud.
The Core have always been a great live band, and also nice guys who put live recordings on their website.
Posted by Svenn at 8:46 PM