Robert Wyatt here, there and everywhere 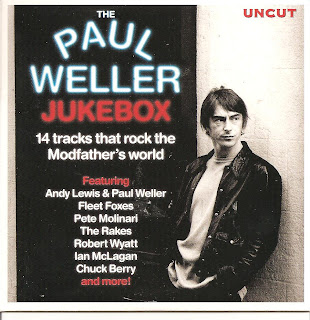 Mojo (no. 181, December 2008) let the fans choose "How to buy Robert Wyatt". "Rock Bottom" is number one (of course), followed by "Shleep", "Ruth is Stranger Than Richard", Soft Machine ("Vol 1&2", counts as one here), "Nothing Can Stop Us", "Matching Mole", "Comicopera", "His Greatest Misses" and "Old Rottenhat". A nice shopping list, but let me just sneak "Dondestan" in around number 6,5 or something.

Uncut (no. 139, December 2008) offers the CD "The Paul Weller Jukebox" to the people, and Weller chose Robert Wyatt's "Free Will and Testament". Good to see Wyatt on CD with Little Richard and Chuck Berry!
As if this was not enough, Uncut also has an "Album by Album" guide to Kevin Ayers, with his own comments.

Check out 39. Deutsches Jazzfestival's site, where they have published lots of pictures from the festival (see Michael Mantler, Karen Mantler, John Surman, Bill Frisell, Gilad Atzmon, Robert Wyatt and others).
Posted by Svenn at 7:02 PM