Conference of the birds 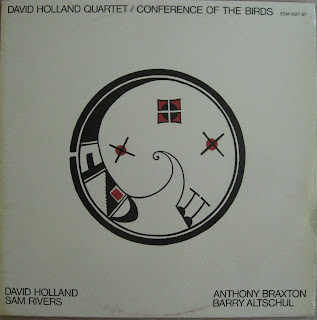 This might be the start of a new series in the blog, focusing on some classic albums (and hereby tagged "The Classic"). A classic here is a record quite often placed in the basement these days, I've played it a lot or just a few times, and it has opened my heart and ears. OK I'm pretty ego oriented, but this stuff will bring joy and happiness to all of you (sorry it's the weekend feeling getting to me). Robert Wyatt's albums will not be represented in this series, since I've already hailed them as classics anyway.

The first choice combine three things I've enjoyed listening to: Jazz, ECM and birds. David Holland Quartet released "Conference of the birds" on ECM in 1973. According to Holland the music is inspired by the birds he heard singing early in the morning "each declaring its freedom in song". The birds probably tried to find a sex partner or were scared to death by some hawk, but that doesn't matter as long as they inspired this music.

The quartet is David Holland (bass), Sam Rivers (sax, fløyte), Anthony Braxton (sax, fløyte) and Barry Altschul (trommer). I was so impressed then (being around 18 years old) and still am. "Conference of the birds" is a real classic.
Posted by Svenn at 7:10 PM