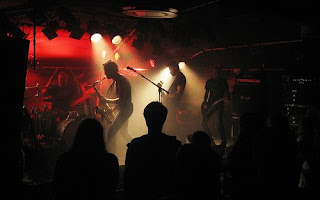 Thursday evening I had finally gathered enough courage to visit my old student club Hulen in Bergen. The beer was just a bit more expensive than in the 70s, but the people in there were so much younger now! Visiting band: Shining. Shining do some serious rock-metal-jazz-progging on stage, and they play loud! Works real fine! Today I even heard they played a great version of King Crimson's "21st Century Schizoid Man" and they even played some exciting new material from the album scheduled for release this autumn. The problem is that I had already left then. The band started playing around midnight and a hard working man like me, just have to get the last bus home. The 35 first minutes of the show were great.
More pictures on Flickr.
Shining are visiting the The Netherlands, UK and Denmark in May (see here).
Posted by Svenn at 7:44 PM