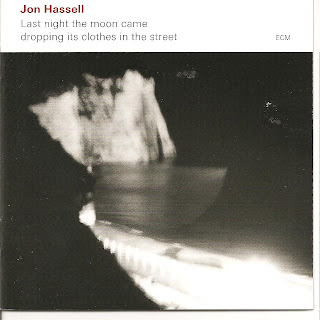 Jon Hassell is back with "Last night the moon came dropping its clothes in the streets" on ECM. This is a record with the usual "not easy to classify" Hassel, but Wyattandstuff will file it under "world ambient". The music floats like a river, often with Hassel's trumpet and a steady bass (Peter Freeman) up front. Chauvinist as I am, I'll just mention the Norwegians on the record: Jan Bang, Eivind Aarset and Helge Nordbakken. This might be boring stuff for some people, but I think it's beautiful, peaceful and emotional, and it's not the party album of the year! In a blindfold test I'm sure some people will go for Arve Henriksen or Nils Petter Molvær.
The album's got a nice title, but it doesn't beat "The Surgeon of the Nightsky Restores Dead Things by the Power of Sound" (1997).
Posted by Svenn at 11:29 PM