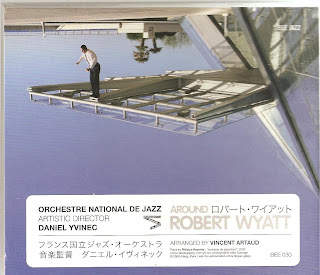 Ah, finally my package with the CD Orchestre National De Jazz "Around Robert Wyatt" (BEE JAZZ Records 2009) was in the mailbox. I'm not really sure if this is a special limited edition, but I got one CD with 11 tracks and one CD (named "Bonus Tracks")with 4 tracks. Robert Wyatt sings on "The Song", "Kew Rhone", "Gegenstand", "Vandalusia", "Te Recuerdo Amanda" and "Rangers in the night", and they are all great versions in my ears! The first three songs here are composed by Peter Blegvad and John Greaves, two artists I'd like to see work more with Robert.
I have to mention that a couple of the songs are quite far out versions of beloved RW songs, for example "O Caroline" (sung byDaniel Darc) and "Just As You Are" (sung by Naim & Arno). The original versions will survive these ones, but the album is fine! "Sounds like Robert got a decent band at last" (John Greaves).

I bougt my CD from Discovery Records.
Posted by Svenn at 6:41 PM