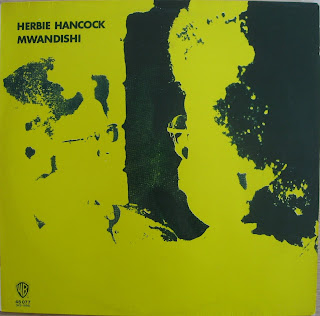 The second album in my classics series is Herbie Hancock's “Mwandishi” (WB 1971) ( the first classic here). The album has three tracks (10-20 minutes long), and my all time favorite was the rhythmic ”Ostinato”, dedicated to Angela Davies. This was magic and mystic stuff to me in the 70s , and the musicians were exciting types with African sounding nicks: Mwandishi Herbie Hancock, Mchezaji Buster Williams, Jabali Billy Heart, Mganga Eddie Henderson, Mwile Benny Maupin og Pepo Mtoto Julian Priester. And believe it or not, but I saw this band at the Molde International Jazz Festival in 1971 (16 years old and lost to music). They played two concerts. I attended one in the Town Hall, but I believe the YouTube clip below was filmed in the cinema the following day.
The very same trombone player, Julian Priester, is guesting on the new Sunn O))) album ”Monolith & Dimensions” (out one of these days)!