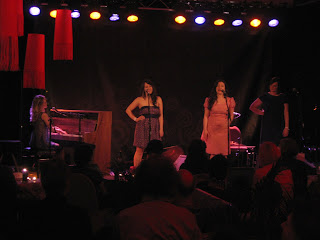 Bergenfest gave us a real nice present Friday evening, a free concert with Rachel Unthank & The Winterset. We got traditional folk, and beautiful covers of Nick Drake ("River man") and Robert Wyatt ("Sea Song"), most of it from "Cruel Sister" (2005) and "The Bairns" (2007). The venue was a hotel bar, and believe it or not, the audience were listening and (almost) quiet during the concert. In a bar in Norway on a Friday evening! Are these girls great? Yes they are. They don't do jigs and reels, but when Becky and Rachel Unthank did som "club dancing" the audience went wild (OK, I'm stretching it a bit here). We even sang along. Great stuff!