The Thing: Bag It 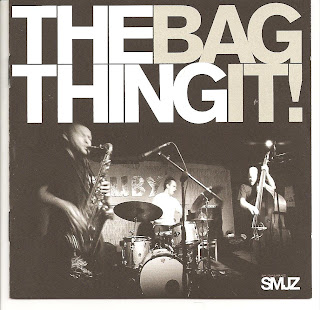 The CD version of The Thing's "Bag It" (SMJZ 2009) will be released 15 June, but you may shop the digital version right now (iTunes and Amazon). I got my CD at the OffOnOff Nattjazz concert last week, and have been warming my ears on it since. You just have to get this one too. One composition by Mats Gustafsson and one band composition (-impro), and tunes by Duke Ellington ("Mystery Song") and Albert Ayler ("Angels"). The opening piece, with the hard to pronounce (at least for me) title "Hidegen Fujnak A Szelek" is credited (The Ex/Muzisikas) and The Thing's version starts a bit like Robert Wyatt's "PLA", and I had some hopes for a couple of seconds there. In one shop (Platekompaniet) it looks like the CD for sale has got seven tracks, but my version at least has a bonus CD with 30 minutes of "Beef Brisket (For Ruby's)" (The Thing), that you also get when you buy the digital version. Over at Smalltown they don't even mention this album yet!
"Ruby's BBQ" here and "Beef Brisket" there, my guess is that these guys are not vegetarians.
Posted by Svenn at 9:17 PM