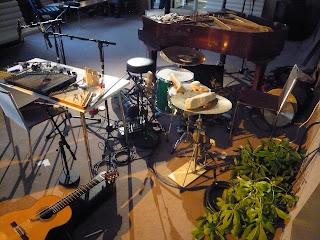 Instead of going to see Motorpsycho again, I chose a double bill with the band Silencers and the duo Espen Sommer Eide and Sigbjørn Apeland.

Silencers is Benoit Delbecq (France) – piano, prepared piano, Kim Myhr (Norway) – guitar, prepared guitar, Nils Ostendorf (Germany) – trumpet and Toma Gouband (France) – percussion. They played one hour of quiet impro, and knew how to get attention without shouting! Not everybody can do that, but Silencers delivered the goods, with prepared piano and a drummer who must have raided the nearest park to find something to hit the drums with. Toma Gouband played with Rhododendron branches for drum sticks most of the concert, so if you have a vacant position for a drumming gardener, he might just be your man. The only musician I know in this band is Kim Myhr (Trondheim Jazzorkester, Mural), and I´ll let you Google the rest of them yourselves too. A fine concert, thanks a lot.

Sigbjørn Apeland (organ) and Espen Sommer Eide (concertinome) were next on stage, and I would need help to describe what kind of music they played. Sommer Eide introduced a couple of tunes saying "I think we´ll play another one for organ and accordion", and that´s what they did of course, adding some electronics too. See the video! It´s not high quality at all, but you will get the general idea. And, yes!, they started throwing Rhododendron leaves at the end of the concert. Smiles all over the house after the concert (all 35 of us that is).
Check out Sigbjørn Apeland in 1982 and Espen Sommer Eide in Alog.