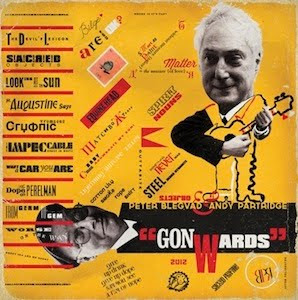 Then you may start pre-ordering: Peter Blegvad and Andy Partridge´s album "Gonwards" is scheduled for release 22 October.

Oh, and you don´t have to settle for a single CD, but even go for one of the 2000 copies of the box set. I´m stealing some info on the box set from Ape House:

* Each copy of the limited edition features a certificate hand signed by Peter Blegvad, Andy Partridge and Stuart Rowe

* The full package comes in a clamshell box including a pack of Loteria - a Mexican game of chance similar to bingo but using images on a deck of cards, drawn by Peter Blegvad - wherein each object depicted can be found in the song lyrics. This comes complete with a set of boards to play the game on, a set of rules and a lyric booklet.