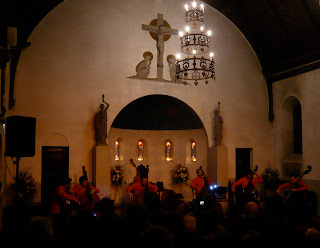 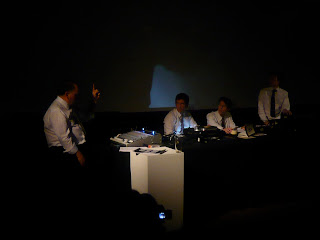 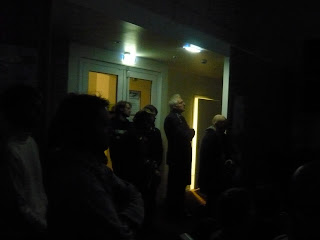 Borealis are continuing their quest for the strange concert venue. Some of the previous festivals had concerts at the racetracks and in the living rooms of the good people of Bergen, and as you might have read yesterday, we were at a waste plant to listen to Lasse Marhaug and others.

On Thursday night the double bass ensemble Ludus Gravis, played at the Solheim chapel (8 basses at most), and we even heard a solo performance down under the chapel, in a crypt where they used to store urns. Intense!
Let me remind you that the theme of the festival this year is "The End".

Later we heard Langham Research Centre and Peter Blegvad perform the new piece "Eschatology" at the Landmark club. The text is written by Blegvad and read by him to soundscapes, partly made by sounds sampled in Bergen.
"Eschatology" explores different kinds of endings, and I had some kind of apocalyptic sci-fi feeling while listening. Bloody marvelous!
And with Peter Blegvad! I was a bit starstruck, but managed to take an undercover photo of him, while he was listening to the last act of the evening at Landmark:*AR.

* AR is Richard Skelton and Autumn Richardson. I have listened a bit to Skelton before this, and recognized the quiet and melancholic music made by samples, this time from the mountains of Northern England. They played in front of one of the slowest videos I have ever seen, showing the fog floating into the mountains. Absolutely beautiful!

Read and listen (to some of *AR´s last album) over at Corbel Stone.
Posted by Svenn at 10:24 PM