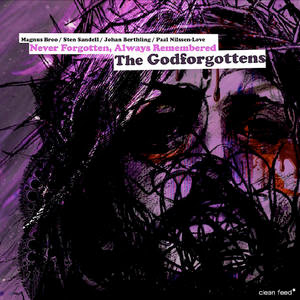 In January I suggested that you should try to get Sten Sandell Trio´s great "Face of Tokyo". I don´t regret that, but what happens when they invite trumpet player Magnus Broo, and Sandell finds a Hammond B-3 organ in the studio? The result might be even better, and they call themselves The Godforgottens. "Never Forgotten, Always Remembered" was released on Clean Feed in 2009. I call it jazz, but may be completely wrong. It doesn´t matter anyway, as long as the music is as exciting as this, and it´s made by Magnus Broo (tp), Sten Sandell (p, org), Johan Berthling (b) and Paal Nilssen-Love (dr).
2009 was quite an average year for Paal Nilssen-Love I guess, participating on 15 albums.
(And who made the dramatic cover? Anyone with a CD version out there, might be kind enough to comment?).
Posted by Svenn at 8:45 PM

the info in the CD case only says

Thanks. This is the one! http://travassos.podomatic.com//

Travassos is the Portuguese designer responsible for all of Clean Feed's latest covers. All quite good