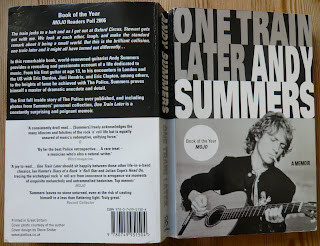 Most people in Norway read crime and thrillers during Easter (yes, it´s tradition), but I chose Andy Summers´ biography "One train later" (Piatkus 2006).
I don´t mind The Police, but the reason I finally got around to reading this book, is that  Andy Summers was in Soft Machine in 1968, touring with them in USA. Kevin Ayers was not too happy with the new man, he might have felt that Summers was a part in pulling the band away from pop and into more experimental territory, and he finally had to go. Summers wonders if one of the reasons could be that he was a far better musician than Ayers, but after some years everything was OK again, and Summers joined Kevin Ayers´ band.

Andy Summers met  Robert Wyatt and Soft Machine in Paris in November 1967, at a big happening called La Fenetre Rose. Summers describes Soft Machine like this: "The Soft Machine takes the stage. Mike Ratledge pushes his arm into the keyboard to make a large rainbow-colored dissonance and they crash into their set with Robert Wyatt´s soulful vocals arching over the angular harmonies".

This is a good read, both when it comes to Andy Summers´ early stages as a musician in bands like Zoot Money´s Big Roll Band and Dantalion´s Chariot, the jet set life with The Police and trying to be a family man and at the same time doing some hard partying.
Some more dates and years, and a bit more on the fellow musicians, would have made this book even better.

I´m happy to read that the author seems to have  a big heart for  Kevin Coyne, even if he could probably wear out his musicians with his behavior and heavy drinking (that everyone was expected to join in on!).

I only own Andy Summers´ duo albums with Robert Fripp: "I advance masked" (1982) and "Bewitched" (1984) (even if Summers lists them as solo albums, wonder what Fripp would say!?).
At least, I bet all of you will enjoy the video posted below!